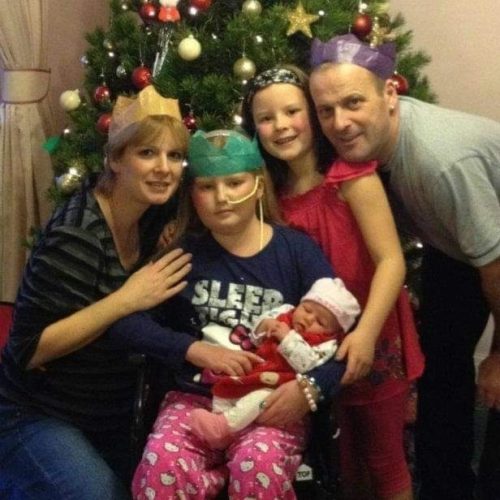 Katy Holmes would have celebrated her 21st birthday in May this year.

But, at just 10-years-old, she was diagnosed with a rare and inoperable brain tumour and given only months to live.

Katy had just started year six and was looking forward to going to high school when her mum, Paula, began to notice something wasn’t quite right.

Normally a very happy, bright and popular girl, Katy had begun to have headaches and was sleeping more often. After many trips back and forth to the hospital, an MRI scan revealed the devastating diagnosis.

To mark the occasion as part of Katy’s legacy, mum, Paula, and Katy’s two younger sisters, Charley, 18, and Scarlet, 10, will walk a 21-mile loop in the Lake District on May 26 – Katy’s birthday – to raise money for the hospice that looked after their family during Katy’s final months.

Paula Slater, 45, from Penwortham, said: “Derian House was a lifeline for our lovely daughter Katy, and for our whole family, which is why we want to raise as much as possible to help them continue the incredible work they do.

“I thought hospices were sad places, and it took some persuasion before I made the decision for Katy to go to Derian. I was heavily pregnant with Scarlet at the time. Charley, who was only 8-years-old, was frightened and confused by what was happening. But it wasn’t what I thought at all.

“Derian is a strangely beautiful place – it has something magical about it – not what you think when you think of a children’s hospice.

“We laughed a lot while we were there, especially Katy, which was so important. There wasn’t anything that the staff at Derian House couldn’t do for Katy and us. They were incredible with her, extremely nurturing, and their love shone through everything they did.

“One of Katy’s wishes on her bucket list was to go on a husky sled ride. Of course, we thought this was impossible – but not at Derian. We had advertised Katy’s bucket list in the press and, out of the blue, a man named Nick arrived at Derian’s front doors with a husky puppy named Storm. While a sled ride was out of the question, the staff at Derian were amazing in welcoming the little puppy into the hospice for Katy to play with. A week later, a whole huddle of husky puppies arrived for the children to play with.

“After Katy had passed away, these huskies became the Team Katy Husky Huddle. They have done so much for us. They came to her funeral and howled together as we arrived.

“We spent a lot of time at Derian as a family and we all have a lot of memories there. I especially remember Jeff the chef who would go out of his way to make Katy’s favourite meals. He would make special meals for us as a family. It was just small things like that that kept us going.

“And, after a long, hard battle, Derian was the place that we said goodbye to Katy. She died peacefully in a big double bed with Dave and I cuddled up to her holding each hand. All the time her favourite Disney CD was playing. It was very peaceful.

“Derian House is incredible and we wouldn’t have coped as well as we did without their support, love and belief in us. The staff pulled together to make sure that we all had every bit of support. The least we can do is raise as much as possible to support them the way they supported us, and show our heartfelt gratitude.

“This is what Katy would have wanted – she always wanted to help others. We hope this can be her gift to mark her 21st birthday.

Sarah Proctor, Community Fundraiser at Derian House Children’s Hospice, said: “It’s wonderful to hear about all the memories that Katy’s family made during their time here and we’re so happy Derian was able to be there for them when they needed it.

“We’re glad that Katy’s family have decided to do such a special thing to mark her birthday and to help other families in need.

“It’s only thanks to the generous donations of our supporters, like Katy’s family, that we are able to do what we do.”

Donate to Paula’s fundraiser to remember Katy on her 21st birthday.