SIXTEEN-year-old Jacob Reddy from Blackburn is touring the country with his acoustic guitar to raise money for the children’s hospice where his brother was cared for.

Jacob will spend 22 days travelling up and down the country this summer, busking in each of the 51 cities in England.

He kicks off his tour in Preston this weekend (Saturday 31 July) busking at the Derian House charity shop on Fishergate High Street and will be moving on to Liverpool later in the day before heading South.

The talented singer-songwriter will be joined on the road by his dad, Anthony Reddy, who will be driving the 2400 miles required as part of the epic fundraising challenge #BUSKINGFORDERIAN in support of Derian House Children’s Hospice.

The Chorley-based children’s hospice provides respite and end-of-life care to more than 400 babies, children and young people with life-limiting conditions from across the North West and South Cumbria.

Derian House is an especially important place to Anthony and his wife Maria, as it is where their son, Joseph (Jacob’s brother) received regular care.

Joseph contracted meningitis when he was just 1 month old and the infection left his brain severely damaged, along with several other medical conditions. 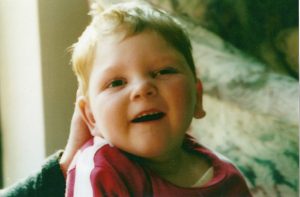 Dad, Anthony said: “Joseph had many operations during his lifetime, but in spite of this was a really happy little boy, who loved being cuddled and spending time at Derian House.

“Throughout his 3 years, we frequently visited Derian House for respite care, where Joseph enjoyed the sensory room, music therapy, pet therapy, the hydrotherapy pool, play sessions and all of Derian’s other fantastic facilities.

“He passed away on 8 September 2003, at Derian House, just before his third birthday. The staff at Derian were amazing in helping our family through the loss of Joseph, and we have returned every year for the annual ‘Forget-Me-Not’ service.”

Joseph would have been celebrating his 21st Birthday in September this year, so the family decided to do something unique and special to mark the occasion.

Jacob said: “I’m taking on this crazy nationwide busking challenge to celebrate Joseph’s life and to say a massive thanks to Derian. My main aim is to raise lots of money for the charity as they have struggled financially due to the pandemic but still continue to care for children like my brother.”

Jacob will be performing a range of both original music as well as crowd-pleasers from his favourite artists including The Killers, Tom Grennan, Calvin Harris and Oasis.

Jacob is no stranger to fundraising for the hospice. In 2020 he hosted a Lockdown Live stream concert on Facebook with help from his sister, Lydia, and a host of young musician friends from the local area. The event raised an impressive £1,600 in just 48 hours and Jacob and Lydia performed a duet of their brother Joseph’s favourite song ‘I Wish I Knew How It Would Feel to Be Free’ by The Lighthouse Family.

One tour date that will be particularly nerve-wracking for the young musician is Thursday 12 August, not because of the anticipated crowds in Cambridge and Ely, but because this is the date that Jacob will receive his GCSE results from St Augustine’s High School. He hopes to head to music college at BIMM in Manchester this September.

Sarah Proctor, Community Fundraiser for Derian House, said: “Jacob’s fundraising mission is absolutely bonkers but we’re all really excited about it! The tour will be a great opportunity to raise our profile to a wider audience and it’s such an uplifting story from one of our Derian families.

“At Derian House, our aim is to make sure the life of every child matters, and to ensure that our families are able to make the very most of every moment they have together. With services costing £5 million to run every year – and just 12 per cent of that coming from government funding – it is only down to generosity such as Jacob’s that we are able to continue.”

Jacob plans to finish his busking tour in Manchester on 21 August and has tickets to see his favourite artist and inspiration, Frank Turner, perform that evening.

To make a donation to the #BUSKINGFORDERIAN campaign, please visit Jacob Reddy’s fundraising page: https://www.justgiving.com/fundraising/buskingjacob or text BUSKINGJACOB to 70085 to donate £1.