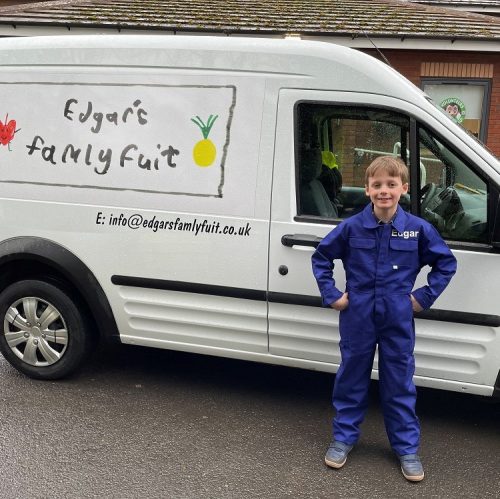 NOT MANY PEOPLE can say they started their own business at just six-years-old, but that’s exactly what young entrepreneur Edgar did.

He never imagined that his letter would result in his fruit pots being stocked in the upmarket store.

Edgar, from Mere Brow, near Preston, started up the fruit pot business with his mum, Jane Johnson, who is on a gluten free diet, making fresh fruit salad the perfect family treat.

The apple of his mum’s eye, Edgar was determined that her recipe should be sold in supermarkets and set about making it happen.

Not just that, Edgar decided to donate £340 of his profits to Derian House, the hospice that looks after 450 seriously ill children and families across the North West.

Edgar said: “When I came up with the name for Famly Fuit I was only six and I spelt it wrong, but my mum liked it anyway and we decided to keep it. It must have been a good idea because Booths liked the pots enough to put them in their shops.

“I know about Derian House and the good work they do because I have a friend who visits there. I decided I wanted to use the fruit pots to raise some money for all their children and families.”

Edgar and his mum visited the charity on Friday, 11th March to deliver a tray of freshly-made fruit pots in their Famly Fuit van.

Proud mum, Jane, said: “It all came from Edgar, he wanted more people to try the fruit salad so we started packaging it up for local bake sales and farmer’s markets. Now, it’s being sold in our local Booths supermarket.”

Sarah Proctor, Community Fundraiser at Derian House, said: “It was fantastic to meet Edgar at the hospice, he’s an incredible young entrepreneur and we are so grateful for his donation to us.

“The money he has raised will help us to continue to caring for the children and young people who need us most.”

Edgar’s Famly Fuit Pots are available to buy in the Burscough and Hesketh Bank Booths stores.