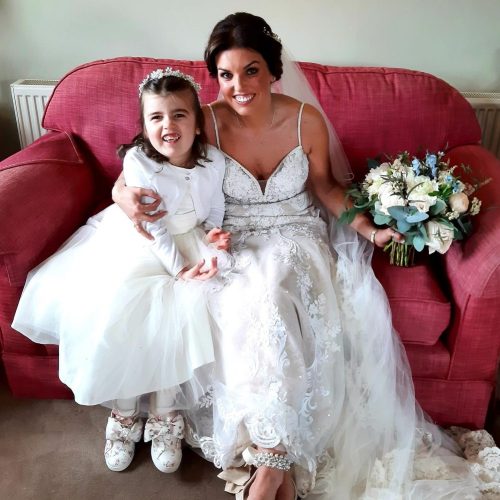 A charity ball in aid of a little girl who suffered brain damage after falling ill on a family holiday has raised £16,000 for the charity that cares for her.

Eliza Young, now five-years-old, from Rishton, was just 10 months old when she was rushed to hospital with meningitis, septicaemia and hydrocephalus shortly after the plane touched down in Malta.

The family spent an agonising three months in a Maltese hospital where Eliza underwent numerous scans and operations before her condition became stable. But the youngster was left with significant brain damage that affected her sight, hearing and ability to walk.

Doctors told her heart-broken family that their little girl may never open her eyes again.

But four years on, Eliza is defying the odds, and even recently walked down the aisle as bridesmaid at her parents wedding.

And now the family have turned their attention to giving back to the charities that helped them cope during their darkest hours.

Eliza’s dad Marc is Business Director at recruitment specialists Zachary Daniels, and the firm decided to mark their 10-year anniversary with a VIP ball to raise money for two charities that helped the family – Derian House Children’s Hospice and Meningitis Now.

“Eliza has come further than we ever imagined. When she became ill we were told she would never open her eyes again because of how the brain damage had affected her. But she’s still here, she’s going to school, she’s walking.

“We’re not sure what the future holds, but her smile is amazing and she’s doing better than any professional thought she would.

“We are eternally grateful to Derian House for the help it has given us – any money we can raise for this phenomenal charity is an honour.”

Colleagues, friends, family, and clients gathered to have fun at the birthday ball for the Cheshire-based company at Manchester’s Lowry Hotel.

Guests enjoyed music, dancing, a three course meal, plus auctions and a raffle with prizes including luxury hampers, experience days, and a table in a VIP suite at Manchester City and Manchester United Football Clubs.

The event raised a whopping £32,000 that will be split between the two charities that help Eliza and her family.

Eliza’s mum, Amy, 34, said: “Eliza is inspiring and strong-willed. For the first couple of years she wasn’t responding to physio as much as we had hoped but in the past 12 months she has really improved.

“She had an incredible smile as she walked down the aisle at our wedding – it made everyone’s heart melt and all the guests applauded her in church which she truly deserved.

“Eliza has a cochlear implant now with a hearing aid and that has really helped her development too.

“We’re just so proud of her progress. It was amazing to celebrate Eliza and show off what she has achieved in the last five years at the charity ball. Zachary Daniels has been so supportive with our family throughout.

“It was great to raise so much money for such a worthwhile charity. Derian House does an amazing job for families, like ours, that need that help, support and normality.

“When we visit we don’t have to worry about anything. The facilities cater for the unique needs of all families. Eliza has enjoyed swimming in the pool and watching films in the cinema. We visited Derian’s holiday lodge and had a lovely time away from home as a family.

“We are so grateful for everything Derian has done for us.”

Zachary Daniels will present Derian House with £16,000 to go towards the 450 families that the charity supports each year.

Caroline Taylor, Head of Income, Marketing and Communications at Derian House Children’s Hospice, said: “Every family’s needs are different and for many, simple things like trips to the cinema or a swimming pool can seem impossible due to accessibility issues and care needs.

“At Derian House, our aim is to ensure that our families are able to make the very most of every moment they have together.

“It costs £5.7million to run our hospice every year and the money raised by Zachary Daniels will help us to be able to support families like Eliza’s in the future.”

Watch Eliza walk down the aisle at her parents wedding. (from 2:15)