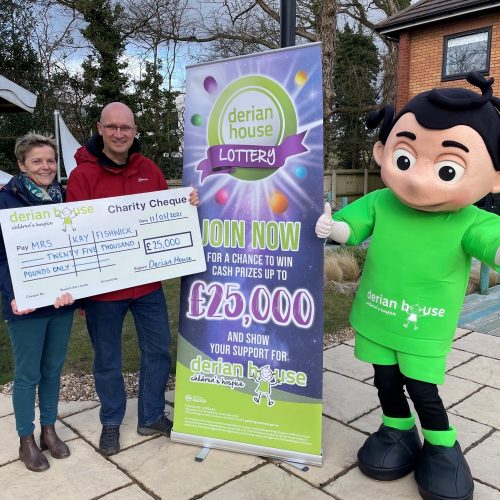 A Chorley woman recently made redundant from work has won £25,000 on the Derian House Lottery.

Kay Fishwick scooped the jackpot in March and became the charity’s first ever £25,000 lottery winner.

“It took a while to sink in, you don’t think it’s real to start with,” said Kay. “I couldn’t believe I’d managed to match 6 numbers!”

Kay and husband Gareth are long-time supporters of Derian House and plan to donate some of the prize money back to help the charity in its work to care for children with life limiting illnesses from across the North West.

Gareth said: “Derian House is a local charity that we like to support. We’ve always donated items to the Derian House charity shops. When our girls were little we’d take their toys and bikes, and then when they got older, they started donating their clothes.

“The win couldn’t have come at a better time as Kay has unfortunately just been made redundant after a restructure at work. It definitely relieves some of the pressure we were feeling.”

As well as donating to Derian, Kay and Gareth plan to share the prize with their family.

“One of our daughters is moving house and our other daughter would like to study abroad in the future so it will be nice to be able to help them both,” said Gareth.

“We would definitely encourage other people to play the Derian House Lottery, not just because we’ve won, but because it is a fantastic cause that needs more support.”

Derian House Children’s Hospice looks after more than 400 children and young people with life-limiting conditions from across the North West. Care is free for families, but services cost £5million to run every year.

With only 12% of funding coming from statutory sources, the charity relies heavily on the generosity of its supporters and players of the lottery.

Angela Towers, Lottery Manager at Derian House, said: “Congratulations to Kay and Gareth on winning £25,000! We’re so pleased that someone who joined the Derian House Lottery to support us has ended up winning such a fantastic prize.”

Sign up today for your chance to win and help support your local children’s hospice https://www.derianhouse.co.uk/derian-lottery/