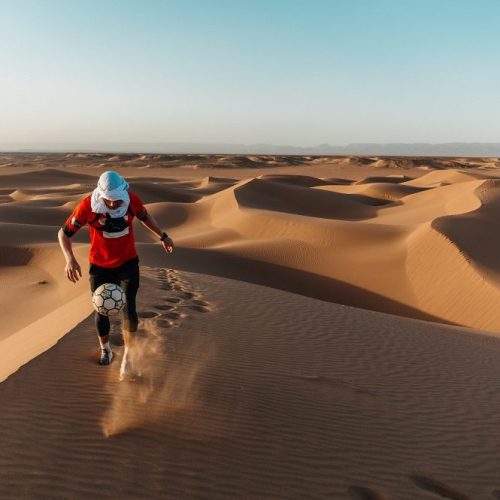 Guinness World Record holder, John Farnworth, is no stranger to a challenge.

He has famously crossed the Sahara Desert, climbed 6,000 metres of Mount Everest, and crossed the world’s largest frozen lake in Siberia – all while keeping a football in the air.

But this time he’s leaving his ball at home and putting on his running shoes to raise money for the children’s hospice that looked after his brother’s family.

This isn’t the first challenge John has undertaken for Derian House. In 2019 he juggled a ball across the Sahara Desert in searing 40-degree heat, raising more than £3,000 for the charity.

The epic challenge earned John his seventh Guinness World Record for the farthest distance covered juggling a football in an hour, in one of the harshest environments on earth.

John, 36, of Longridge, said: “I’ve pushed myself to the limit many times before, but for my latest crazy challenge I decided to do something different.

“Running 4 miles every 4 hours won’t be easy, but if it raises vital funds for Derian’s families, then it will be worth it.

“My driving force is the bravery of my brother and sister-in-law who over the last 2 years have lost 2 babies, Margot and Matthew. Derian House has been a massive support to my family and I want to encourage everyone to donate.”

John’s brother, Paul Farnworth, 32, said: “Derian is an amazing local charity that provided me, and my wife Jess, with so much support during our complicated pregnancies and throughout the grieving process.

“I’m proud and pleased that John has decided to raise money for them and we wish him the best of luck.”

Mick Croskery, Fundraising Manager at Derian House, said: “It’s incredible what John has achieved so far, and we’re so grateful for all that he has done for Derian.

“We couldn’t do what we do without the kindness of people, like John, who go out of their way to raise vital funds so we can continue to provide care for our children and young people, and their families.”

Derian House Children’s Hospice looks after 450 children and young people from across the North West. It offers respite and end of life care and helps families make precious memories to last forever.

Help John reach his fundraising target by donating to his JustGiving page.