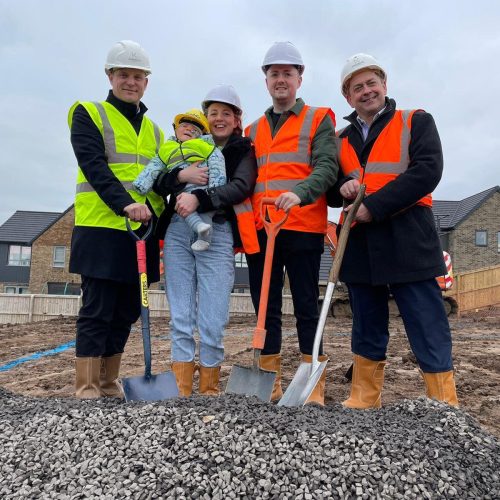 FREDDIE Halliwell was born with a rare genetic condition that makes him one in a billion.

And the one-year-old from Darwen, Lancashire, certainly showed how special he is when he helped break ground for a brand new home being given away to raise money for the charity which supports him.

The ceremony – which took place today in Blackburn – marks the official start of work on a house donated by Kingswood Homes to Derian House Children’s Hospice in the Great Big House Giveaway.

People can buy tickets from £5 to be entered into a prize draw to win the £250,000 house on the award-winning Green Hills development in Blackburn, Lancashire.

Freddie’s parents Kari and Sam were thrilled to be able to join in the momentous occasion, and have even bought tickets to the draw themselves!

Freddie spent his first six-and-a-half weeks in hospital on the neonatal intensive care unit (NICU). Doctors told Freddie’s parents Kari and Sam that developmental delays because of his condition would mean their little boy would never walk or talk. But the couple are hopeful he will prove them wrong.

Mum Kari, 26, of Darwen, said: “Freddie loves coming to Derian House. He smiled for the first time whilst in the hydrotherapy pool there, which is a moment I will always treasure.

“We all get so much out of coming to Derian. We’ve made new friends at playgroup and it’s a lovely atmosphere. I always wanted to take him to baby sensory groups but didn’t like the thought of people looking at him funny because he has a tube in his nose and looks a bit different, but at Derian it’s not like that. You feel accepted and the staff are all so friendly and warm.”

Freddie, along with mum Kari and dad Sam, was joined by Paul Jones, Managing Director of Kingswood Homes and Derian House Chief Executive David Robinson, for a ground-breaking ceremony at Green Hills in Feniscowles, Blackburn on Wednesday afternoon.

It marked the start of construction on the three-bedroom detached home designed by HemingwayDesign, the company co-founded by Blackburn-raised Wayne Hemingway MBE.

Paul Jones, Managing Director of Kingswood Homes, said: “As a growing Lancashire-based business we wanted to give back to the community and, having had personal experience of the support that children’s hospices like Derian House offer, it was a natural fit. The idea of giving away a house may seem too good to be true, but it’s not. Now that work on the property is underway we expect there will be an increase in ticket sales as people realise they really could be part of this award-winning development for as little as £5.”

Unlike other prize draws, The Great Big House Giveaway sees every single penny of ticket sales going to the charity, which cares for 400 seriously ill children and young people from across the North West.

David Robinson, Chief Executive of Derian House Children’s Hospice, said: “We are so grateful to our friends at Kingswood Homes for such a generous donation and hope the prize draw raises lots of money and awareness to help us look after children like Freddie and their families.

“At Derian House Children’s Hospice we receive only 12% of funding from the NHS and so have to rely on the generosity of our supporters for the remainder.”

Tickets for the Great Big House Giveaway start from just £5 for a bundle of six entries. The more tickets bought, the better value, with £100 buying 250 entries.

There will be a guaranteed winner of the prize draw, to be announced at a glittering gala ball in September.

Chorley-based charity Derian House offers respite, palliative and end of life care to children with life-limiting and life-threatening illnesses, helping them to make the most of the precious time they have with their families.