Rally is a ‘banger’ of a fundraiser for children’s hospice 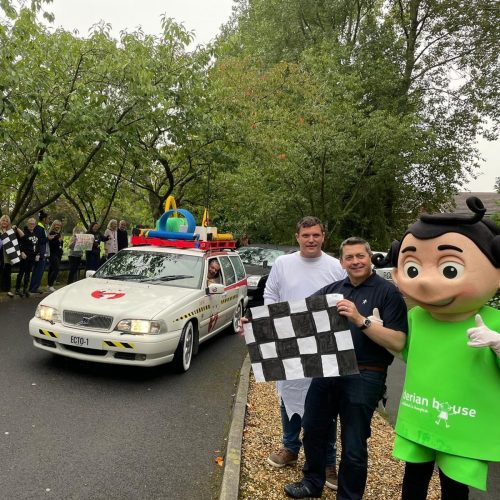 ICONIC vehicles from the movies – including Lightning McQueen and the cars from Ghostbusters and Dumb and Dumber – were part of a banger rally that raised more than £30,000 for a Lancashire children’s charity.

The 14 cars, which also included an American police car, drag queen car, a car signed by Liverpool FC players and an homage to Grease, set off from Derian House hospice in Chorley on Friday morning (Sept 23).

Teams weaved their way up to Carlisle, completing a number of challenges on the way, including checking into locations, finding a pumpkin, a Top Gear DVD, sheep’s wool and a broomstick!

After camping overnight in Carlisle, the drivers travelled in convoy back to Kingswood Homes’ Green Hills site in Blackburn for a fun awards ceremony.

The cars, which had to cost £1,000 or less as part of the challenge, will now be auctioned to raise even more money for the charity which looks after seriously ill children from across the North West.

Paul Jones, Managing Director of Kingswood Homes, said: “Derian House offers such an amazing service to the local community that we wanted to get involved and raise as much as possible for this great charity.

“Thank you to all the teams from Kingswood and our partners who joined in and took part, making the rally even bigger and better than we ever hoped for.”

The rally is part of a year-long drive by Kingswood Homes to raise money for Derian House Children’s Hospice. The generous house builder has also donated a brand new home worth £250,000, on their Green Hills development in Feniscowles, to give away in The Great Big House Giveaway. Tickets, costing from £5 can be bought by visiting www.derianhouse.co.uk/house.

The winner will be announced at a glittering gala ball in September 2022.

Caroline Taylor, Head of Income, Marketing and Communications, at Derian House Children’s Hospice, said: “We’re gobsmacked with how much the teams in The Great Big North West Tour raised for Derian House at the weekend and are so grateful for the effort and creativity they put into the rally.

“Not only has this event raised vital funds that will help us to look after seriously ill children and their families, it was also a really fun morning at the hospice when the cars visited us before setting off. The children loved seeing the different vehicles and it gave the staff such a lift to see the lengths the teams had gone to in order to raise money for our hospice.”