Greater Manchester-based educational resources supplier Findel Education are top of the class after scaling the country’s highest mountain to raise money for charity.

The intrepid team of 18 members of staff put their strength to the test in the super slog to the top of Mount Snowdon in North Wales, to raise money for Derian House Children’s Hospice, on Friday, 17 June.

Findel Education has supported Derian House as its charity of the year since 2019 and since then has raised more than £30,000 for the care of children and young people with life-limiting conditions.

The Snowdon challenge was inspired by a walk they took part in during the COVID lockdown in which 150 of Findel’s employees walked the distance of Lands End to John O’Groats and back (socially-distanced), to raise £7,000 for the charity.

Claire Woolley, Executive and Business Support Manager at Findel Education, said: “I am still on cloud 9 after such an amazing day on Friday climbing Mount Snowdon with the team. 18 of us set off on the hottest day of the year so far in search of the summit.

“It was definitely a challenge, the route we climbed was tough, demanded concentration and a good amount of physical and mental energy, but I can honestly say reaching the summit was one of the best experiences I’ve ever had!

“It was the fact that all 18 of us dug deep, and pushed on and all reached the top within 30 mins of each other. We are so proud to have raised over £7,000 for Derian, we know how much this will mean to them.”

And Snowdon isn’t Findel’s only undertaking this year as seven of the company’s bravest will also leap out of a plane for Derian House this summer as part of the Dive for Derian skydiving challenge.

Ellie Smith, Community Fundraiser at Derian House, said: “Although it’s free for families, it costs £5.7million to run services at Derian every year.

“Without our generous supporters, like Findel Education, we wouldn’t be able to provide care for our 450 children and young people. We’re so impressed by their team work and dedication to Derian.” 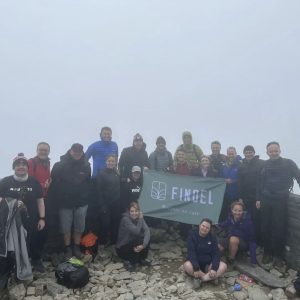 Support Findel on their Snowdon climb by donating using their JustGiving page: https://www.justgiving.com/fundraising/findel-snowdon22