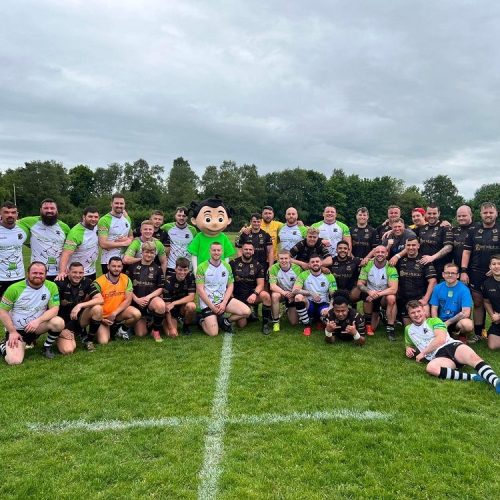 Families flocked to see local rugby clubs battle it out in a tag-rugby festival to raise money for Derian House Children’s Hospice.

A total of 12 teams signed up to take part in the festival at the Panther Park grounds in Chorley on Saturday (21 May) with entry fees alone raising £600 for the charity.

And that wasn’t all, mixed youth teams from under sevens to under 15s also took to the field.

The Chorley Panthers’ team wore their own specially-designed Derian House playing shirts that they later auctioned off to the public and raised almost £2,000.

Custom Derian House training shirts were sold to the public in the run-up to the event so that they could show their support on the day.

Signed rugby memorabilia, courtesy of Wigan Warriors Rugby League, and Chorley boxing legend Jack Catterall’s boxing glove and shirt were up for grabs in a raffle.

Hot food and drink was on offer including a barbecue and bar for spectators to enjoy throughout the games.

All the funds raised on the day will go to Derian House Children’s Hospice, and the final figure is soon to be revealed.

Peter Bridge, Chairman of Chorley Panthers, said: “This was our very first annual charity fundraising event and it went brilliantly. The event was really well supported and I’d like to thank our sponsors and everyone who got involved.

“The Chorley Panthers against Hindley game was tough. Everyone played really well and we’re looking forward to a strong finish to the season.

“All of our club members are incredibly proud and pleased with the day and we’re looking forward to revealing the final amount raised.

“Derian house is an incredibly important Chorley charity and was our first pick in our first every annual charity fundraising event.”

Sarah Proctor, Community Fundraiser at Derian House, said: “The Panthers versus Hindley game was ferocious! It was great to see so many people come together

“Thank you to everyone who got involved to help to raise money for our 450 children and their families, we wouldn’t be able to do what we do without our supporters.”

The full amount raised on the day will be revealed on Derian House’s Facebook page.