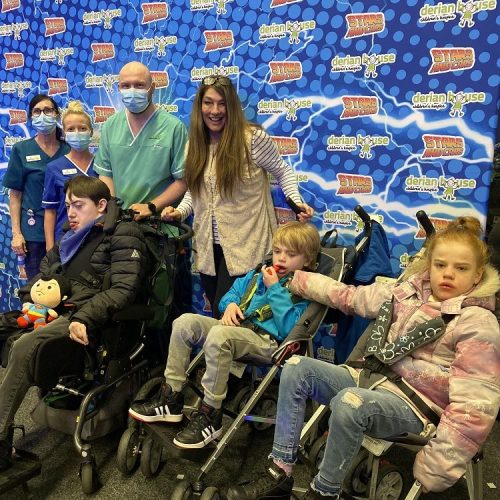 The magic of the movies came to Bolton this weekend when a special charity event saw the red carpet rolled out for a whole host of stars and their cars.

More than 4,500 fans travelled to Bolton Arena on Sunday for the chance to see the Batmobile, have a picture with Jet from Gladiators and even stroke a baby dinosaur from Jurassic Park!

The annual Stars & Cars event, which brings fans an extravaganza of childhood heroes and iconic cars from film and TV, had been postponed for the last two years due to the COVID-19 pandemic.

But it returned with a bang with a sell-out event that showcased three years of hard work from organisers Mick Croskery and Colin Wilby, from Stars and Cars Events.

Fans came in troops to meet their heroes, including The Madalorian’s Boba Fett, plus other Star Wars characters Chewbacca, Darth Vader, and Kylo Ren.

There were also appearances from DC Comics’ Batman, 80s cyborg assassin The Terminator, Top Gear’s The Stig, and an eight-foot animatronic dinosaur from Jurassic Park.

Famous cars included Back to the Future’s DeLorean, the Ghostbusters Ecto-1, and Batmobiles from both the 1966 and 1989 Batman films.

Colin Wilby, Stars & Cars organiser and Ambassador at Derian House Children’s Hospice, said: “It was absolutely fantastic to be able to run Stars and Cars again after a two-year halt due to COVID.

“So much hard work goes into organising an event like this, but seeing the smiling faces of the crowds as they meet their heroes makes it all worthwhile.

“We couldn’t run Stars & Cars without the loyal army of volunteers who dedicate their time and energy into helping make the event as amazing as it is. If you attended, volunteered or showcased your vehicle at this year’s heroic event – thank you! Your support means the world to myself and Mick.”

Caroline Taylor, Head of Income, Marketing and Communications at Derian House, said: “Stars & Cars is one of our biggest and best events of the year and we’re so thankful to organisers Colin and Mick for the tireless work they do in pulling such a huge event together.

“It’s only down to events such as these that we are able to continue caring for children with life-limiting conditions from across the North West now and in the future.”

It is hoped the event will raise more than £20,000 for the Chorley-based charity which looks after 450 children and young adults with life-limiting conditions, helping them to make the most of every moment.

Find out more about Stars & Cars.