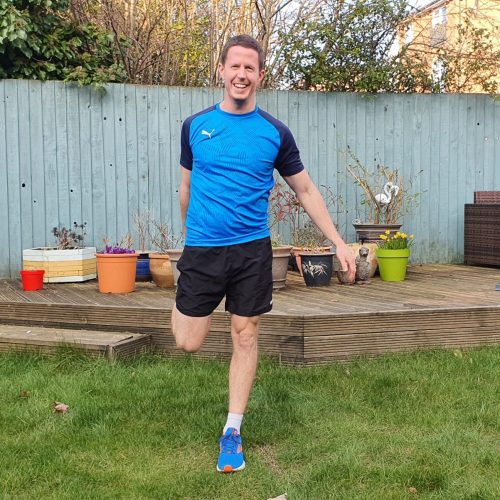 A dad of two is set to take on an epic challenge as he prepares to run 100 miles over four days – visiting ten local hospices on his route to raise awareness and valuable funds for the specialist care they provide.

Martin Foster, 38, from Urmston, works as programme lead for GM Hospices, and his job means he is all too aware of the invaluable role hospices play in providing a unique, holistic approach to palliative and end of life care.

That insight and knowledge that, with only around a third of funding (or less in some hospice cases) coming from the NHS, the ten hospices in Greater Manchester have to raise £20million a year to continue providing care, spurred him on to come up with his very special challenge.

People have a preconceived idea about what hospices are like, and I have to admit I did too before I worked in this sector. It’s an expectation that they’re really sad places and only exist to support those who need care at the very end of their life. But, while obviously there are very sad times and end of life care is such an important part of what hospices offer, there’s so much more goes on too.

Patients are cared for right through their journey and there’s a whole range of services that local people simply wouldn’t have access to if hospices didn’t exist. They rely heavily on their communities fundraising, and having worked so closely with them I just had to put my trainers on and do my bit to support them.

Martin will start his challenge at Derian House Children’s Hospice, running 40km a day over the four days, visiting each of the other hospices in the area – Bolton, Bury, Dr Kershaw’s, East Cheshire, Francis House, Springhill, St Ann’s, Wigan and Leigh, and Willow Wood – before ending his epic run at Piccadilly Place in Manchester city centre.

Martin began his training six months ago and is looking forward to seeing his wife Lucy (38), and children Freddie (5) and Tilly (2) waiting for him on the finish line on Friday 1st April, along with colleagues and friends from some of the hospices he has visited on his run.

I used to run before my children were born but haven’t really done much since. I’m a bit nervous about the scale of the challenge and how my body will feel to be honest, as I’ve never really put it through anything like this. After the first day we’re in uncharted territory, but I’m hoping that the support of the hospice staff and patients I see on route will really spur me on – as will the knowledge that all the money raised will be split between the local hospices and hopefully help them make a difference to people’s lives.

I can imagine I’ll feel quite emotional when I get to the end to be honest. It’s been a lot of hard work and long hours to get to this point, and I know there are lots of people cheering me on. Any of us could need hospice care, or know someone who will at some point in their life, so if local people could spare even a couple of pounds in sponsorship I’d be hugely grateful. It would mean so much to patients across Greater Manchester, and it would help me continue putting one tired foot in front of the other for the 100 miles too. Thanks in advance for your support.”

GM Hospices is a unique, first of its kind partnership, comprising the Greater Manchester area’s adult hospices, plus Derian House and Francis House children’s hospices. The group works together to help influence and improve the provision of specialist palliative and end of life care for people in the area, sharing resources, creating standards for equitable care, and building infrastructure to enable those standards, ambitions and aspirations to be delivered locally.

Hospices in Greater Manchester need to raise £20million a year to continue providing their care, with money raised via a huge range of initiatives – from high street shops to events, lotteries to donations left in Wills – and is only achieved thanks to the generosity and support of the local communities they serve.