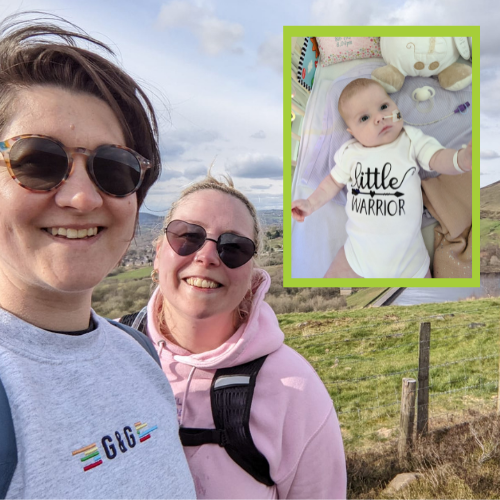 A Greater Manchester woman whose bad back left her unable to walk is tackling an 84-mile hike to raise money for Derian House Children’s Hospice.

Becki Beresford, 31, from Rochdale, was in such severe pain that she needed two major operations on her spine over the past four years.

But despite this, she plans to take on one of the UK’s most gruelling hikes to raise money for the charity that took care of her partner and her family.

And she will be joined by an intrepid team of 22 of her pals from Rochdale-based company Zen Internet.

Over four days, June 9 to 12, the adventurous colleagues will walk and camp their way across 84 miles from Wallsend to Bowness.

The epic challenge is part of the company’s pledge to raise over £5,000 to be shared between three chosen charities, including Derian House.

Becki, an Operational Performance Analyst at Zen, jumped at the chance to raise money for the Chorley charity just one year on from her second spinal operation.

She said: “I’ve always had a dodgy back. I thought it was just the way I am, that it was just something I had to put up with.

“But in 2019 things got considerably worse. I went from being able to walk to crawling around the house because I was in so much pain. I had no idea what was going on. It was terrifying.

“An MRI scan found that I had a prolapsed disc in my back. I was told that the nerves in my lower body were crushed and that I should have been paralysed.

“I had emergency surgery the next day and began to recover. However, things took a turn for the worse and by December 2020 I was in so much pain I couldn’t walk and was back to crawling again.

“I got an appointment to see a specialist. I was incredibly fortunate to speak to someone. I was told that, with my condition, there was a 10 to 15% chance that the pain would return after the first surgery. Unfortunately, I was in that percentage.

“I was told the longer I left it, there was more risk of permanent damage. So due to NHS delays, I decided to fundraise so that I could pay for the operation myself.

“Thankfully the surgery was a complete success. There is still a risk of it coming back, but I’ve been told I’m okay to walk the Hadrian’s Wall path. I’m beginning to feel like I have my independence back and it’s wonderful.

“I’m terrified; I’m not going to lie. But it’s a once in a lifetime thing and I’m doing it for such a good cause. The knowledge that I’m raising money for Derian will help me push on.

Becki’s partner, Louise Dewsnap, is the aunty of two-year-old Isabelle Molloy, who was cared for at Derian House, before sadly passing away in August, 2021.

Becki said: “Derian House looked after Isabelle, her dad Nick, and her brother James, when they needed it the most. The support they have provided has been incredible.

“Everyone at Derian is so compassionate and so kind. They kept baby Isabelle engaged, they helped her family make lasting memories with her.

“Derian made Isabelle’s short life as wonderful and enriched as it could be.”

Louise, 35, said: “What Becki has achieved over past few years is amazing considering this time last year she couldn’t even go for a short walk and struggled sitting at the kitchen table to eat.

“It’s amazing that she’s taking on the Hadrian’s Wall challenge and it’s even more amazing that she’ll be raising funds for Derian. It’s a fantastic organisation who do amazing work and me and my family are so grateful for their support when my niece Isabelle was in their care. I’m very proud of Becki and how far she’s come over the past couple of years.”

Ellie Smith, Community Fundraiser at Derian House, said: “Becki’s determination is incredible after everything she has been through – she is very brave!

“We couldn’t do what we do without our supporters, like Becki and Zen Internet, who go out of their way to raise money for our 450 children and families.”